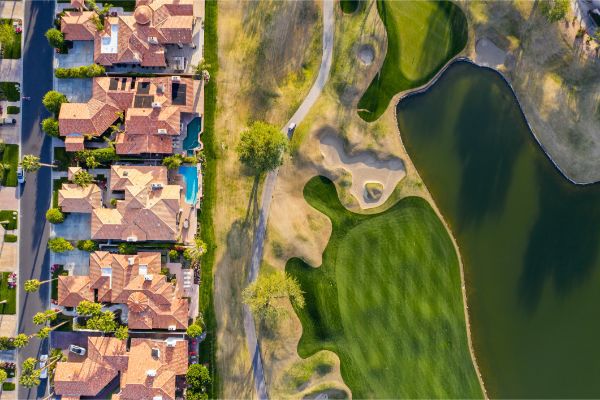 Imagine returning home from your summer holidays to find that your back patio that once looked upon an endless green golf course was obscured with construction vehicles and torn up ground. If you ask some residents of Phoenix?s Biltmore Estates, they will tell you that unsightly construction was just the beginning of their woes. Here is more on the legal troubles that continue between Biltmore area homeowners and a local golf course company.

Biltmore Estates residents live in an upscale community with two golf courses running throughout–the Adobe and Links courses. When homebuyers bought their luxury properties in this exclusive community, it was with the expectation of being able to enjoy living in relative peace and quiet. Living on a golf course, residents understood there would be some activity near their homes.? However, when the owner of the golf courses decided to begin construction on an events pavilion to host non-golf related functions, that was another story. Soon, without warning, Biltmore residents saw putting greens unearthed to prepare for the development. The community immediately began to mobilize against these changes out of fear that the golf courses’ new business would negatively impact the neighborhood’s peace.

The Golf Company Trying to Change with the Times

The golf courses at issue are owned by JDM Golf LLC, also known as JDM Partners, a real estate acquisition, development, and management company. Jerry Colangelo, the former CEO and chairman of the Phoenix Suns, is a partner with JDM. JDM argues that the changes are about keeping pace with the demands and preferences of existing and new clientele as traditional golf is declining in popularity. In its countersuit, JDM states that 80,000 rounds are played at the two Biltmore courses each year. This number is far less than the 105,000 people who played a decade or more ago. Today, other Valley courses host non-golf related events, and others have shortened their courses for faster play. JDM is also in the position of needing to add ancillary activities to remain competitive. JDM argues that, at a minimum, it needs a new clubhouse and more parking to function.

Biltmore homeowners are unsympathetic to JDM?s plight and visa versa. Consequently, homeowners filed suit against JDM on numerous grounds. They went to the City of Phoenix, arguing that JDM?s proposed actions violated zoning ordinances for the community and that the Biltmore Golf Club only allows golf-related activities.

According to a recent report, a city Zoning Adjustment Hearing Officer found some additional uses are permitted by JDM, provided they are within a building as part of the golf course zoning district for the property. JDM appealed the decision to seek clarification as to the hearing officer?s findings. In September, the Phoenix Board of Adjustment is scheduled to consider JDM?s appeal. Since the zoning decision, JDM has filed seven complaints against the homeowners, their trusts, and the Homeowner’s Association (HOA). These actions are reported to primarily concern first amendment issues.

Laura B. Bramnick is an Arizona real estate attorney with the knowledge and experience to protect your interests during every stage of your real estate matter. If you are seeking an exceptional, client-driven real estate lawyer in Scottsdale, Phoenix, Sedona, and throughout the State of Arizona, contact Laura B. Bramnick to schedule your consultation.